Guide to US Sports

Sport in the United States is as important to American culture , as food is to the functioning of the human body. In fact, some may even say it is a religion, worshiped by avid and passionate fans from across the world.

The sporting world in the US is dominated by the four major leagues of football, baseball, basketball and hockey, and this is apparent in the home, in the education system and on the field.

So what's all the big fuss about? Check out our Guide to US Sports to find out and plan your next RV rental vacation around it.


Known simply as football or gridiron, American Football is quintessential to any sporting experience in the US.

The NFL is the highest level of professional American Football in the United States and is played between two teams of 11.

The objective of the game is to score points by advancing the ball into the opposing team's end zone. It involves a lot of running, throwing and tackling and is largely a spectator sport.

Spanning 17 weeks of the year, the regular NFL season begins in the first week of September and runs weekly until late December or early January.

American football is played across all states of the US and is also played in Europe, Japan , Mexico and several other countries.

The NFL playoffs at the end of a regular season culminate in a championship game known as the Super Bowl. Loosely considered an American holiday, the Super Bowl is one of the nation's (and the world's) most watched sporting events.

Football is easily the most popular spectator sport in the US . In fact it is the most attended domestic sports league in the world by average attendance per game, with an average of 67,509 fans per game.

Teams to win the Super Bowl in the past decade include the Green Bay Packers, New Orleans Saints, Pittsburgh Steelers, New York Giants, Indianapolis Colts and the New England Patriots. 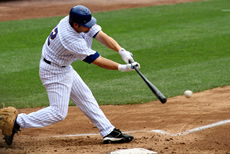 Baseball in America is almost as standard to the common household as bread and milk. This bat-and-ball sport is played between two teams of nine players each, with the aim of the game to touch four bases arranged at the corners of a diamond before returning to the original place of play.


Major League Baseball (MLB) is the highest level of professional baseball in the US and is comprised of 30 teams, with 29 in the US and one in Canada .

The regular baseball season in the US falls between April and October each year.

Baseball is widely played (and watched) across the US and also in Canada, Australia, Japan, the Netherlands, Mexico and Puerto Rico

A major league champion is named each year at the World Series, where four teams make the playoff from each league. The World Series has been baseball's major event since 1903 and each year concludes the postseason of Major League Baseball.

Baseball is often referred to as "America's pastime" or "America's national religion". Rivaled by American football, baseball maintains many loyal fans and is essentially part of the American culture.

Some of the most famous and winning teams include the San Francisco Giants, New York Yankees, Philadelphia Phillies, Los Angeles Dodgers and the Boston Red Sox. Basketball is one of America's favorite team sports in which two teams of five score points by throwing a ball through the top of a basketball hoop. The National Basketball Association (NBA) is the pre-eminent men's professional basketball league of America and consists of 30 clubs, 29 of which are in the US , with one in Canada.

The NBA regular season begins in the last week of October and a total of 82 games are played throughout the season. It draws to a close in April, after pausing for some of February for the All Star game. After the regular season, the playoffs begin.

Basketball is watched and played across all states of the US . It is a popular sport worldwide, with professional leagues in places like the Philippines and Australia .

NBA Playoffs is a best-of-seven elimination tournament between 16 teams in the Western and Eastern conferences. The finals are generally held in June and determine the championship team of the year.

The NBA All Star game is held each February and is comprised of players voted by the public. Two teams are comprised of east vs. west players and a "Most Valuable Player" is named at the end.

Basketball is one of the most widely viewed sports across the world. In the US it is also extremely popular to play, with close to 50 million players in North America alone.

The Boston Celtics have won the most championships, with 17 NBA Finals wins. This is closely followed up with 16 overall championship wins by the Los Angeles Lakers. The Chicago Bulls come in third place, with 6 championships thanks to basketball legend, Michael Jordan. 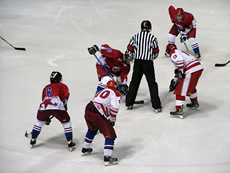 This family of sports is played in teams in which the aim of the game is to maneuver a ball or puck into the opponent's goal by using a hockey stick. The sport itself comes in many forms and can be played as field hockey, ice hockey, roller hockey, sledge hockey and street hockey.

Ice Hockey is incredibly popular in the US and is largely associated with the National Hockey League (NHL); an organization considered the premiere professional ice hockey league in the world. The league is currently comprised of 30 teams across the US and Canada .

The regular season of hockey in the US begins in the first week of October and runs through to mid-April. The Stanley Cup playoffs then run from April to June.

Hockey (in its many forms) is played widely across the United States . Field hockey is also incredibly popular in Europe, Asia, Australia and New Zealand , while ice hockey is more common in Canada , Finland , Latvia , the Czech Republic and Slovakia .

Similar to basketball, the NHL annually hosts the Stanley Cup playoffs, which consists of four rounds of best-to-seven series. A team from each conference will go in the finals to determine which team will take out the Stanley Cup Championship.

In North America, ice hockey is the lesser of the four major professional sports (football, baseball and basketball), but is followed religiously in Canada . In the US , the game is more popular in regions with a cooler climate, such as New England and the mid-west.

Teams who have taken victory at the Stanley Cup playoffs in the past decade include the Chicago Blackhawks, Pittsburgh Penguins, Detroit Red Wings, Anaheim Ducks and the Carolina Hurricanes.


Although often overshadowed by the four major American professional sports, the National Association for Stock Car Auto Racing (NASCAR) is fast becoming one of the nation's most watched sports.


NASCAR is the largest body of stock car racing in the country and sanctions over 1500 races annually.

The annual race schedule for NASCAR usually kicks off in February, with races held throughout the year through to November.

NASCAR events are broadcast across the US , in Latin America, Australia and Canada .

The Sprint Cup Series is an automobile racing event that holds strong roots in the south-eastern states of the US . Each year it attracts around 16 million US viewers, making it one of the world's most viewed motor races.

Held around the same time as the Sprint Cup, the Nationwide Series is a short track race that races relatively different cars to its cousin.

The Camping World Truck Series races an entirely different standard of vehicle and is the only series in all of NASCAR to race modified production pickup trucks. Commencing in 1995, this series now boasts 22 teams and 37 drivers.

NASCAR is one of the most viewed professional sports in terms of television ratings in the United States . Broadcast to over 150 countries across the world, NASCAR has more sponsors than any other motor sport.

A popular recreational sport for both boys and girls, soccer is a team sport with the aim of the game to kick the ball into the goal of the opposing team's end of the field.

Soccer is primarily a winter sport, and the yearly season generally begins in early autumn and ends in late spring (April to September).

Soccer is played across the United States and in many countries across the world.

Although often overshadowed by the four major league sports, soccer is becoming a phenomenon across the entire nation. Once big in places like New Jersey, Texas, New York, St Louis, the Pacific North-west and Southern California, it has now become widespread.

When it comes to events in the soccer world, there really are none bigger than the FIFA World Cup. Held every four years, FIFA is an international association football tournament of men's national teams, with 32 teams competing from across the world.

With the arrival of international superstars David Beckham and Thierry Henry, soccer in the US has reached all-time-high attendance levels. Tennis as we know it today originated in the United Kingdom as "lawn tennis" and the rules have not changed much since the 1890's. It is usually played between two (singles) or four (doubles) players, with each player using a racquet to strike a hollow, yellow covered ball over the net.

Enjoyed by millions of recreational players, tennis is also a hugely popular spectator sport and is watched by people in countries from across the world.

The tennis season begins at the end of January with the Australian Open and runs through until October, drawing to a close with the US Open.

Although often overshadowed by the four major league sports in the US , tennis is widely watched, with the US Open one of the highest viewed sports telecasts of the year.

The US Open is one of the sport's major events and is held each year at the USTA Billie Jean King National Tennis Center . It is one of four tennis grand slams held each year, joining Wimbledon , the Australian Open and the French Open.

Serena and Venus Williams have dominated the women's tennis world for the past decade, while Rafael Nadal and Roger Federer are currently ranked top of their field in men's tennis, respectively.